Wow, the party is only recently finished and we’ve already got a review on the site! How’s that for efficiency? (You can thank Gary – he was uploading the pics and so we completed the post while we were here.)

So, we had an open house from 12 noon until 5pm and people could come and go as suited their day. The first guest arrived just after 12.30, and after getting a drink we got straight into making the card. Then another person arrived, so there were two make and takes being done. Unfortunately, I forgot to get pictures of the end results! We had a nice chat about crafting, and craft shows, and looked at the samples I had out, and they both bought catalogues. Then they went off to carry on with the rest of their day, happy in the knowledge that they had found another crafty outlet locally, and maybe some new friends to be creative with! They both seemed very impressed, and were hopefully inspired to want more.

Then literally moments after closing the door, we had another guest arrive, and then two more in quick succession. Again, we made sure everyone had refreshments, and then got stamping! There was a much longer session of reading the catalogues, and writing lists of wishes, and then the filling of order forms commenced. One guest then left before she started buying even more, and was replaced at the door by another! We ought to have installed a revolving door for the afternoon 😉 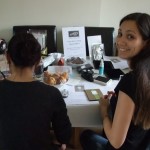 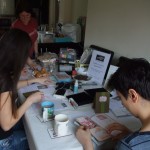 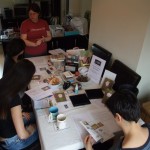 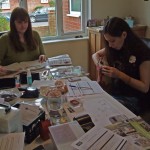 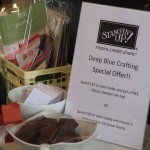 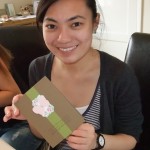 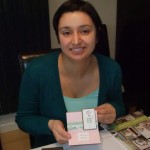 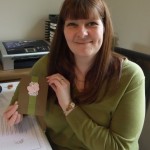 It’s always nice when people who are into other crafts try stamping and enjoy it. And enjoy it enough to want to order a few bits to do more at home later 🙂 Everyone seemed to have a thoroughly good time, and enjoyed the stamping and the cakes which disappeared happily once they got started. In total, 7 people attended this launch party, which is a really great start for my first such event.

The seventh was my newest downline, Julie, who brought her sign-up paperwork for me to sign. While she was here, she also had a go at the make and take project and oohed and aahhed over the new products from the mini catalogue that she hadn’t yet seen. I think her wishlist is growing by the day! It’s nice to have such enthusiastic new friends.

The next thing is to put the orders through, once I’ve added my few bits to the list, and to get them on their way to people as soon as possible so they can get playing. I’ve pretty much tidied the room, which is good going for someone who can make a house a disaster zone in 10 minutes or so! There are just a few bits and bobs to get put away where they came from and it will be a dining room once again…