One of the guys in our office is currently off “sick” having had a rather gory knee operation. I made the fatal mistake of asking what he was having done – and after being told the gory details I rather wished I hadn’t asked! As he’s a young guy (though he’s a touch older than me!), and likes going out with his mates and also hosting parties, I thought this card would give an appropriate get well sentiment: 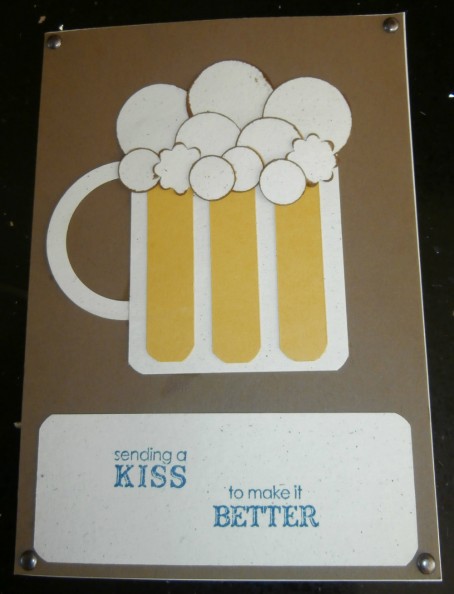 I know you wouldn’t usually put “kisses” on cards for workmates, but the relationship that Chris has with the guys in the office is very tongue-in-cheek so I thought this was highly appropriate! (Plus it was nice to have a specific “get better” type of sentiment on the card, and I don’t have many of those in my Stampin’ Up! current stamps collection!)

Here’s the card opened out: 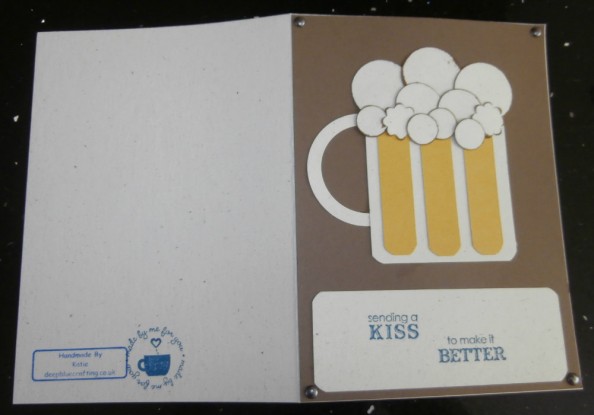 I stamped the “made for you from me” sentiment and image from the stamp set A Fitting Occasion, though I ought to have stamped it a little less centrally on the back of the card in order to make my Deep Blue Crafting stamp look a little less crammed in!

The “head” on the beer was made using Naturals White cardstock punched with various circle punches and the Boho Blossoms Extra-Large punch, edged with Baked Brown Sugar ink, and then stuck down. The beer is rectangles of Hello Honey card with the corners rounded using a circle punch as the scale was too small to use my Project Life Corner Rounder. It might have been slightly easier to do with a pair of scissors in hindsight, but it is what it is! It did the job.

Chris sent a message to the office on Monday to pass on his thanks to all who signed his card, so I gather he was pleased with it 🙂 I believe that he is healing well (though the op didn’t go as smoothly as hoped, he is doing okay) and is working hard from home. It looks like he will be back on schedule, if not before, but we might have to make sure he doesn’t overdo things! The office is very quiet without him… 😉