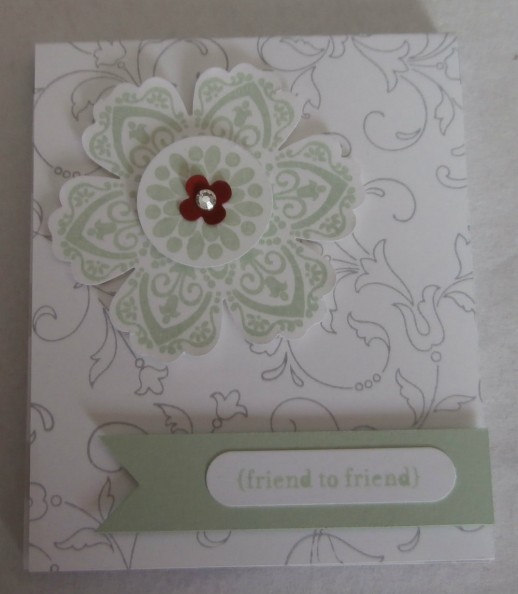 As promised, here is the Make and Take project that the attendees for my New Catalogue Launch Party open house event got to make when they came along. The inspiration came from a swap that I received at a Stampin’ Up! training event that the girls and I liked the concept of when we were looking for inspiration for the project: 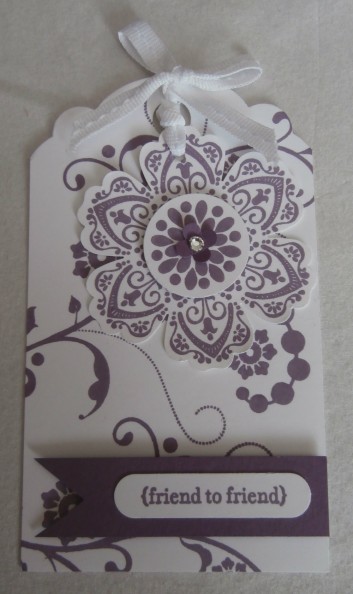 The flower on this is actually dangling from some ribbon, but this was not the effect I wanted. Plus it can be a bit fiddly to achieve and with some brand new stampers due to come along I didn’t want to scare them off!

I changed out the colour scheme from the original Perfect Plum to make use of some of the new colours that have just been released: Smoky Slate and Pistachio Pudding. The background flourish is from the Creative Elements set, and the sentiment is from Teeny Tiny Sentiments (now called Teeny Tiny Wishes, I think, just to be confusing!). And the main flower image is from the Mixed Bunch stamp set, using the coordinating Blossom punch. The dinky flower centre is from the Itty Bitty Shapes Punch Pack, cut from Raspberry Ripple cardstock and topped with the quintessential Basic Rhinestones. Love them!

The banner is cut from Pistachio Pudding cardstock, and the sentiment is cut out using the Word Window Large punch.

So quick, yet very easy, even for brand new stampers. Especially if you use a Stampamajig to place the background images as we did.

And finally here’s a picture of the original and the Make and Take together. The original was a tag, which would be great for birthday presents and the like, and the revised version was a cover for a mini notebook. What a great gift for a friend. 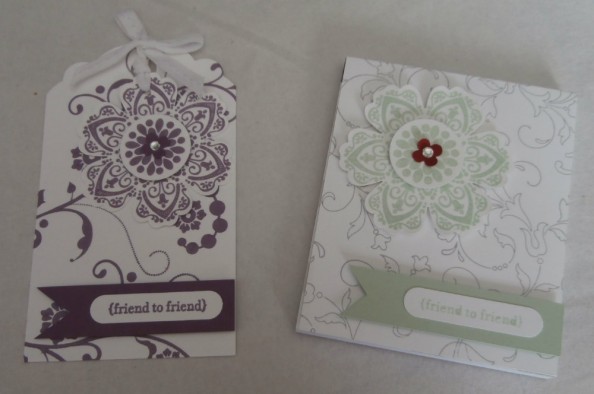