Frozen – wow, what a phenomenon! Everyone seems to be obsessed with it, including my twins… which is why they *had* to have Frozen themed birthday cards for Monday:

We will start with Smidge’s card, as he is the older twin and so that just seems right. I gave him the option of a card with fishes and octopuses and generally sea- themed, or Frozen, and he immediately went for Frozen. Smudge, bless her, said “Mummy, maybe I could have fishes” as I think she wanted to be nice in case I already had a fishes card and needed one of them to have that! I said to her “Are you sure, you would rather have fishes than Frozen?” and she replied in the affirmative, but quite unsure-sounding. So I asked once more: “Fishes or Elsa?” And she immediately said “Oooh, Elsa!” So that sorted that.

Talk about leaving things to the last minute, though – I made these cards on Sunday night, and it was the twins’ birthday on Monday! They opened a lot of their presents on Sunday so that they had time to play with them as they were at nursery on Monday, but we kept all of their cards for the day itself. 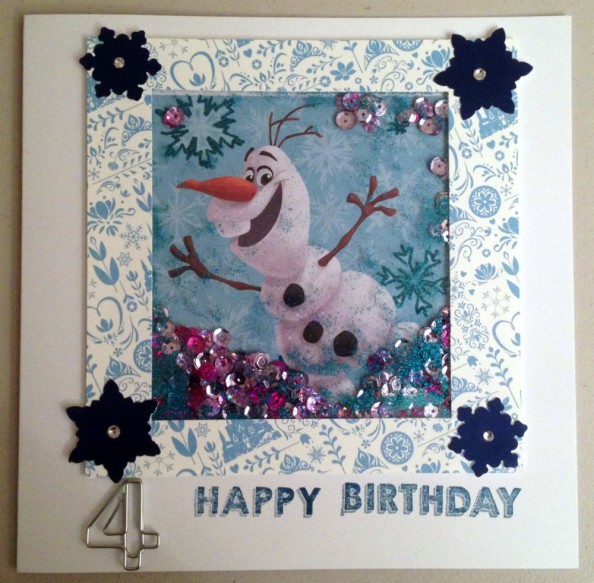 Smidge did make my day, though – as soon as he opened the envelope he said “OLAF!! An Olaf shaker – look!!!” and he was so pleased. It was fabulous, and worth the effort. Not that it was a massive amount of effort, really. I bought the Frozen papercrafting magazine in WHSmiths as I knew it would be good to craft with, and that had the idea in it for Smudge’s card below. It has a number of different papers in it, including character images from the Frozen film. I used Olaf for Smidge’s card, and cut the image out to the size of the square background. I stuck that flat onto an 8×8″ white card blank, and then copied the blue castle paper onto some Whisper White cardstock to give it a bit more substance. I cut the printed card into a frame to fit over and around Olaf. I used my Stampin Trimmer to cut the insde of the frame, as it has the track which can be moved to allow the blade to cut at any point along the paper or card – which is a very useful trick!

I have a glue pen which is like a biro, so I used that to trace around some of the snowflakes in the background of the Olaf image, and then sprinkled them with some blue ultrafine glitter which I got in The Range and reminded me of the Frozen colour palette. I added shaker tape around the outside of the image, and then put some more glitter and a handful of pink sequins into the frame. I added more shaker tape to the outside of the blue printed frame, as well as a piece of acetate on the back to keep all of the shaker elements where they should be. I added the frame over the image and the glitter and sequins, and I had a fabulous shaker element. I then used one of my brand new (sneak peek) stamp sets which I got as part of the OnStage pre-order for the new Spring/ Summer catalogue which will be available online on January 3rd. I used Island Indigo ink to stamp the sentiment from Party Wishes which is part of the It’s My Party suite. I used sticky tape to mask off the words in order to stamp them next to each other instead of stacked as they are on the rubber.

The number 4 is a paperclip which I bought in a pot from Ikea, bizarrely enough! They were not very expensive, and they have at least a couple of each number in there. I think they might have been 1 or 2 pounds for the pot. Not bad, and perfect for this project! Having seen Valerie’s reindeer cards using the Reindeer Clips from the Autumn/ Winter catalogue, I was inspired to simply stick these clips onto the card blank using Tombow (multi purpose glue). It worked a treat.

Smudge’s card’s shaker element was one I saw in the Frozen magazine, and loved the concept: 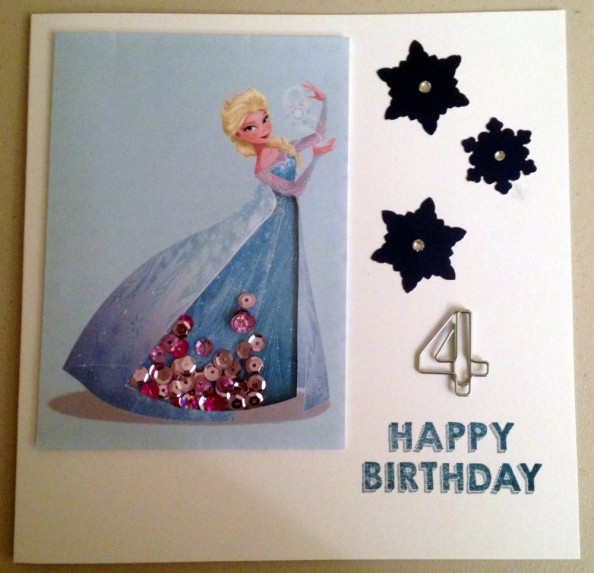 I cut around the under layer of Elsa’s dress with a craft knife, and then stuck the cut-out onto the card blank (another 8×8″), being careful about how I positioned it to have the overall image placement on the card in a way that worked. I meant to stick the foam shaker tape around the image on the card blank, but I forgot, and added it to the top layer once I had stuck the acetate on. It wasn’t a big issue, but it did mean that I couldn’t easily add glitter to Smudge’s card because it would be hard to contain it within the shaker area, and glitter can be horrific for stopping the shaker tape from sticking properly. But the sequins stay in a nice pile relatively easily so that was fine. I obviously added another layer of shaker tape around the outside of the overall image, to give it stability across the whole panel. Again, the 4 is an Ikea paperclip, and for both cards I added som metallic blue snowflakes. They were cut from Hobbycraft “scrap card” packs, which have a number of different card finishes in them. The blue just worked nicely for this project. I used the Stampin’ Up! Snow Flurry punch, which is happily one of the carryover items for the new catalogue, along with the coordinating Flurry of Wishes stamp set. So why not treat yourself to the bundle now? A snowflake is not just for Christmas, you know!

I topped the snowflakes off with varying sizes of Basic Rhinestones, to match the varying sizes of snowflakes. On Smudge’s card, I went with simply stamping the sentiment “as it comes”, as the stacked layout worked much better with the overall “shape” of her card.

I stayed with the sneak peeks for the inside of their card:

This is another stamp from Party Wishes, and I thought it perfectly encapsulated a 4 year old’s view of birthdays (and probably most of the rest of us, if we are honest!). I love this stamp, and might well stamp it inside a bunch of my Christmas cards too. Because, why not? Such a great font…

They both loved their Frozen birthday cards, and now I have to come up with something special for them for Christmas. I am currently leaning towards sticking with the shaker card option, as what 4 year old doesn’t love an interactive card? But I will step away from the Frozen theme for this one, and go with penguins, snowmen, reindeer and the like! I have plenty of bits to choose from. It will be kind of nice to have had quite a strong Frozen theme for their birthday, with a number of their presents being Frozen related (bed sheets, “Barbie” style singing dolls, wall canvases for their bedroom, Christmas hats, etc.) and then have much less Frozen stuff for Christmas – I think/ hope! Though to be fair, I like a bit of Frozen – I just don’t want a Frozen house!! It will be good when Frozen 2 comes out – we might even be brave and take the twins to the cinema to see it…

Right, so those are my creative shares for today, and a very long post to go with them! Don’t forget that it being a Wednesday, there are some new weekly deals available: 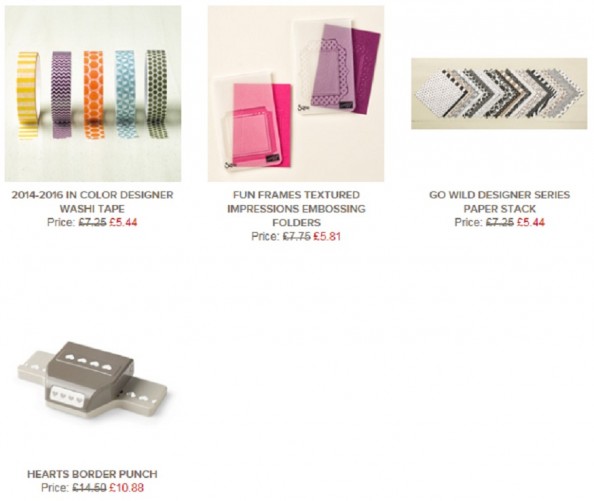 I have an incredibly busy week this week, with only one evening at home, for one reason or another, so I won’t get a lot of crafty time in! Especially with the twins’ party on Saturday and the required prep for that. But on Sunday life should be a little calmer, and my brother and Sister-in-Law are staying over after the party so hopefully they’ll stick around for a bit on Sunday and Tim can play with the kids and Tash and I can do some crafting! Lovely.

Tomorrow I will share with you the snowmen that the twins and Daddy made at Tuesday Tots, using the bits that Gary and I punched out on Sunday. They went down very well with the people who came along to the group yesterday, but unfortunately Gary didn’t get a photo of all of the cards they made. Sometimes he’ll take a “group art” photo when the bits are on the stage to dry, but there wasn’t really anything to dry on these as they were stuck together with Pritt Stick so I’m not sure if he forgot or didn’t have a chance to take an overall photo. Never mind!

Have fun and a great day. And don’t forget to order your Snow Flurry and Flurry of Wishes bundle – you can save 15% by buying both items together! You might find that one of the elements to tomorrow’s card is a bit familiar… 😉