I am sure these used to be called something far less fancy than “luminaries”, but as that is what I seeing them called all over the place at the moment, that is what I shall go with!

I love these; one of the girls at the Stampin’ Up! training last week had made them to decorate their table, and is also selling them at craft fairs at the moment: 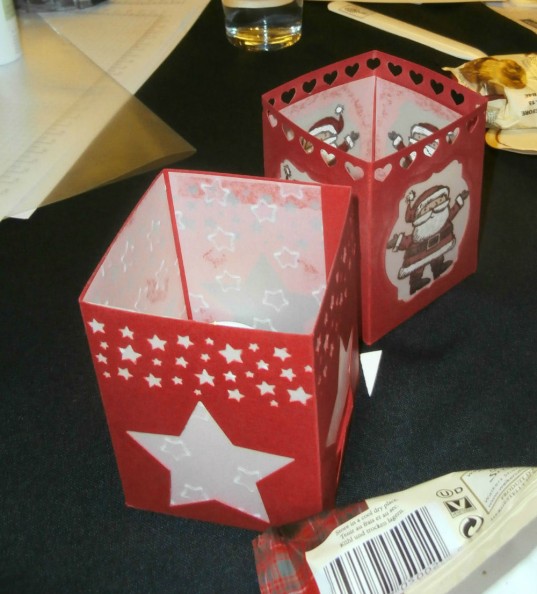 They use the Get Your Santa On stamp set, blendabilities to colour them (and I think a little white gel pen for the beard and white “fur” on Santa), and the star pattern is done using the star embossing folder. The star and label are cut using framelit dies, and the tops of the luminaries are done with the border punches – the hearts from the annual catalogue and the confetti stars from the Autumn/ Winter seasonal. I have so many plans for that punch, I just need to implement them…!

As I mentioned yesterday, my box of pre-order and SaleABration goodies arrived while I was at work so I got to explore that once the twins were in bed. I managed to unpack some new stamps, have a bright idea, *and* implemented the idea all within a couple of hours. As implementing the idea involved inking up the brand new stamsp, I was pretty proud of that! I think that may be the quickest I have ever got a new stamp set inky!

I made some Project Life cards for a layout which came to me while admiring the stamps, and I will share them with you soon. I might even get the photos printed out so I can show you the completed layout. It all depends how my weekend goes, as I have quite a bit I need to sort out for Christmas. I cannot believe it is only 2 weeks to go already. How is that even possible?! Just now it seemed forever away and I had loads of time to get things sorted – not any more!! I have almost sorted the bits for the twins, except a couple of specifics wich they have asked for and something that I know they will love. Other than that, I have sorted out two of the seven people I have to buy for, and need to look at what I want to ask for from hubby. I know the general idea, I just need to choose the specifics so he can order it is that’s what he wants to get me 🙂

I just hope I get a chance to write some Christmas cards as well, especially as we are seeing my parents on Saturday for the day, and are then out on Monday for Gary’s birthday present (from March!). Busy busy, I need to get organised (again!).

Have a great weekend, and I will share my new projects with you next week, including some sneaky peeks and hopefully some quick crafting from the weekend. If I can get the cards completed, I will share the messy crafting I did on Tuesday with you. I would love to get some of these luminaries made as well. But although I don’t think they are majorly involved to create, I think it would be a step too far to try to make them this week… maybe next week!

Stamp Set: Get Your Santa On.