I know it’s a slightly odd post title, but this is a two-in-one post. Today is my wedding anniversary, so ideally I’d have liked to share with you the card that I made for Gary, but it wasn’t to be. I couldn’t take the photo before I gave him the card, as I didn’t want him to see it on either the site library or on the camera before he saw the card itself! (He’s been working on my site recently, so even my media library was not necessarily a safe place to store it!)

And as I only gave him the card before heading off to work this morning, I didn’t take the pictures yet. So instead I had a brainwave and will share with you the wedding card I made for a work colleague who got married a few weeks ago: 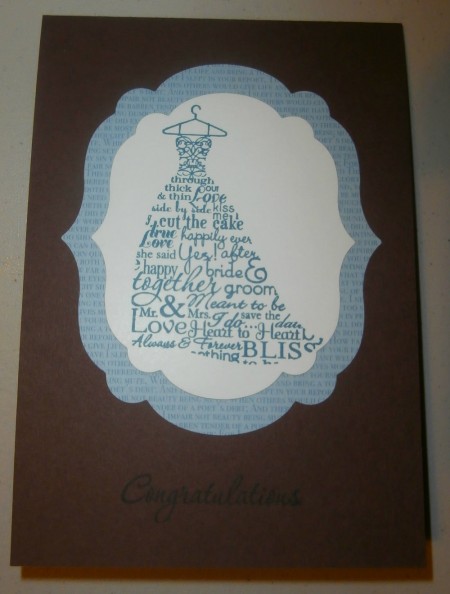 And a closeup of the dress on the inside:

I love this stamp set – it is so pretty! And so versatile, and looks different depending on the colour scheme you use. I wanted to use a slightly less traditional colour set-up for Jamie’s card, as she’s not what I would call a typical girlie-girl, though she does like a lot of girlie things. When I saw the Chocolate Chip card and the blue Designer Series Paper I loved the combination and thought that Jamie would appreciate that more than pinks or reds. So I went with it! I do have to say it reminds me of chocolate box colours 🙂

The DSP is from the retired colour family stacks, and this particular one is Bashful Blue (which is appropriate for this post as it is the colour I used for my own wedding invitations!). The stamping is done in Island Indigo ink, and as I said the base layer is chocolate chip. The dress on the inside of the card is the second generation stamping after having stamped the image on the front of the card. It gives the insert some colour and interest without taking over on the inside of the card. You simply re-stamp the image without re-inking the stamp. So easy!

And the shapes were cut with the Labels Collection Framelits using the Big Shot. I love these shapes – can you tell?! They do pop up a lot in my projects. I may have a new favourite soon, though, as the Window Frames Collection framelits look great with circular images and I have a few of these that I want to use more of… So maybe watch this space, especially for some new Christmas card designs soon!

As for life at home, it is still hectic (but what do I expect with twins who turn two at the end of the month?!) and we spent yet another evening/ half the night in hospital with my poor little boy as he has yet another infection which sent us to hospital instead of coming home on Sunday evening after a lovely weekend with Nanny and Grandad. He seems to be on the mend, but I do feel so bad for him as he is very susceptible to bugs at the moment. I just hope that his twin sister does not take up her “space” and take her turn to go to hospital again in a couple of weeks – at the moment they seem to alternate every 14 days or so with an ambulance ride and hospital visit each. It is such hard work, and very draining, as it takes a long time and it’s usually a very late night when we are discharged. But on Saturday the twins played with Nanny and Grandad and I actually got to do some digital crafting! I set up some templates for my December Dailies pages which I mentioned about in my Digital Scrapbooking Deal Day 4 post last week. So that was brilliant!

And I’m currently in the midst of making my swaps for Convention which I cannot believe is only a week and a half away now! I am so very excited about that. I just hope that the twins are healthy that weekend so I can enjoy it without worrying about them while I am away… I started my swaps last night, and with Gary’s help I have done the first half of about half of them. There is lots of punching, cutting and sticking involved, but not a lot of thinking, so they are easy to make in front of the TV! So I expect I will do some more on those over the next few nights, but tonight is earmarked as time to have a nice takeaway and time to watch a film with my husband. It might not be highly exciting to some, but it should be nice to have that time together. And I will try to get some photos of the card I made in order to share that with you, too. Have a great evening!