It’s my “little” brother’s birthday today, so I had to make him a card or two. I actually made two, a mustache-based jester, and a sheepy card, and let the twins choose which one should be from them and which should be from us. They unanimously chose that they wanted to give him the “hat” jester card, so that was easy!

Here’s the card they chose: 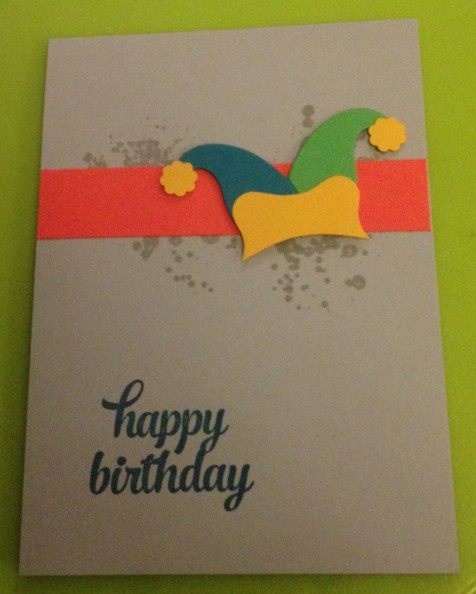 Apologies for the bright green background – I took the picture with the card on the twins table after they had signed it.

I’m afraid that I used a couple of now retired products to make this card, but it was too cute to resist! That’s the thing about Stampin’ Up! products, there are so many cute ways to use them that you don’t want to get rid of them just because they have retired – I certainly don’t! I try to share projects using current or upcoming products with you where I can, but sometimes an occasion demands a jester’s hat, or other similar item which just needs older product.

The jester hat is made using the mustache framelit from last year’s annual catalogue and one of the Itty Bitty punches from the retired set. There are a number of flowery shapes which would have the same effect, though. The jester hat shape could easily be cut by hand, but it was obviously easier to use the die as I had it! I found the idea on Pinterest, from here: http://alexscreativecorner.blogspot.co.uk/2015/05/jester-hat-card.html And she even gives us the “recipe” for making the jester hat! I changed up the card slightly, but the hat is so cool! I liked using the brightness of the In-Colours to mix it up a bit, though the regals that Alex used are very rich and deep.

While I was making this card us, I made a few for my “stash” as well, as they only used half of each mustache shape, and they were very quick to put together. I like quick and easy cards!

I stamped the background with Gorgeous Grunge in tone-on-tone stamping to give some texture, as Alex had done, but I just went with a Watermelon Wonder band across the card and left off the backing oval. The bling didn’t quite work with my revised layout, so I left that alone.

Hopefully Tim will like his happy jester day card – the twins were certainly taken by it! Speaking of which, it is their birthday on Monday and so this weekend I need to get making their birthday cards! No jesters, just shakers, I think. Maybe Frozen themed and sea themed? That’s the way I’m currently leaning, but we will “sea” what emerges when I sit down to create!

I have some new little stamps and dies to share with you next week, including the birthday card that Gary and I gave to Tim, and hopefully some more Christmas cards if I have time to make some. I did some watercoloured AquaTint backgrounds last night once my migraine had fully cleared, so I have some big plans of what I can do with those. They have a little bit of silver mixed in, to give them a lovely subtle shimmer. Beautiful!

Are you tempted to make a jester card, or any other such die- or punch-art? If so, do share, I would love to see your creations! Have a fun weekend and I will be back on Tuesday.