Morning! An unexpected Monday post from me today as I bizarrely missed posting on Thursday. Sorry about that.

So today I have the Mid-May weekly deals to share with you – these deals are valid until tomorrow night, and then we will have a new set on Wednesday. 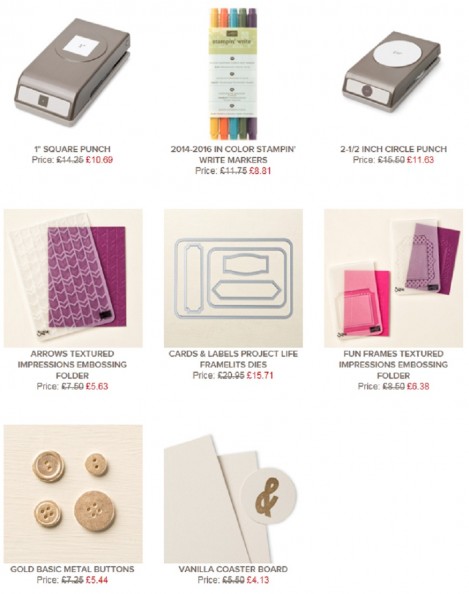 I cannot believe it is “Mid-May” already! Where oh where is this year going? It seems to be thundering past without a care for what needs to be done around here! It feels like I blink and I miss the weekends – and am back at Monday morning again. Ah well!

But we did have a good weekend this weekend. We drove up to Telford on Friday, leaving at 10am… and didn’t arrive until gone 4pm 🙁 That was a horrid journey. What should have taken about 3 hours or so with stops, actually took over 6 hours. So we didn’t get a chance to take the twins anywhere for fun and running around, which was a real shame. We met a bunch of the Stampin’ Stars on Friday evening, and the twins were very well behaved, though for them they were quite wriggly and squiggly – because they’d been cooped up pretty much all day. Late bedtime for them that night!

Then on Saturday I went to my Stampin’ Up! regional event at the International Centre. Gary and the twins came over with me in the morning and Smidge and Smudge did all my swapping for me! I really wish I had some photos of that, but I had full hands and was trying to sort them out with one swap at a time. They were so cute! Smidge clicked on really quickly as to what happened, and would hand over his swap and then say “where mine?” if they weren’t quick enough!! Seeing the reactions of people was great, especially those who were not expecting a swap to come at them from elbow height. A few times they missed out because they asked people who were walking “do you want to swap?” but they were so little and so quiet that they weren’t necessarily seen or heard! But most people who saw them wanted to swap with them just for the novelty value and the cute factor. They got lots of smiles and lots of “awww”s.

Thanks to all those people who gave us two swaps with sweeties in so they could have one each. We’ve not gone through them yet as the weekend was very busy, but they will have a few bits at a time.

While I was “ensconsed” with the SU! crew, Daddy and the twins went to the park, and to Wonderland (which they had free entry to by staying in the International Hotel) and had lots of fun. Then they came and met me at the end of the day, got involved in the Stampin’ Stars team photo (which is shared on the Stampin’ Up! social media pages) and were very sociable. We went off for dinner and it was another late night but they were happy.

Smidge chose my number for prize patrol, but unlike when we went to the Jojo baby shop and they got me 50% off in the draw, his choice was not lucky this time. So I didn’t come home with any new goodies this weekend other than a Stampin’ Up! branded calculator which everyone got. Never mind, I have my little people which is better than free stamp sets!

We went to the Black Country Living Museum on the way home from the Midlands, and that was a pretty good day out. It wasn’t really ideal for the twins, but they were good and they found some bits interesting. We went down the mines and they were really brilliant and not scared at all. Smidge kept trying to steal the torch, but other than that there were no issues. Smudge lost her helmet a couple of times, but considering that they were big helmets which adults could wear, it’s not hugely suprising! We adjusted it as small as it would go, which was actually pretty small, but she still had a slightly smaller head! Later in the day she actually fell asleep on Daddy’s shoulder, she was that tired. They had fun on the Victorian fairground roundabout, and the bus (which we went all around the route on), and Smudge made a friend in the Worker’s Institute who thought she was “gorgeous” and who loved her curls. Smidge adored the old-fashioned telephone in there which told him a story – he was fascinated.

And then we headed home, tired but happy. I have lots of inspiration in my camera to share with you between now and the catalogue launch (and maybe even after that!) so I will be sure to get the photos uploaded to show you. I will say, there are some *amazing* kits in the new catalogue, and I am planning to do some classes/ get togethers based on at least a couple, if I can get the logistics of it all sorted out. Watch this space!