Yet more original cards to share with you – hurrah!

Though I have to admit that this particular bunch are not my own makes, although I did have a hand in quite a few of the components. I had a friend come over on Friday, let’s call her “H”, and we made a birthday card for her Dad, which I will share with you later in the week, and then she wanted to make some Christmas cards. So did I, as I am hoping this year to actually make enough Christmas cards to be able to possibly sell some at work…

I had a look through my Pinterest boards to see what inspired me, and this one came up: Pennant Parade Christmas.

I don’t have a number of the elements used in the example card, including the dots embossing folder, the card colours, or the ribbon, and my Word Window punch was in the cold garage so wouldn’t have worked to well as they get a bit “sticky” when they are cold. So we compromised, especially as H is a very new crafter and only made her first card last week (which I would love to share with you, but I didn’t remember to take a photo, sorry!). And in compromising we came up with this (which I did make, as this was the “example” we followed for the others!): 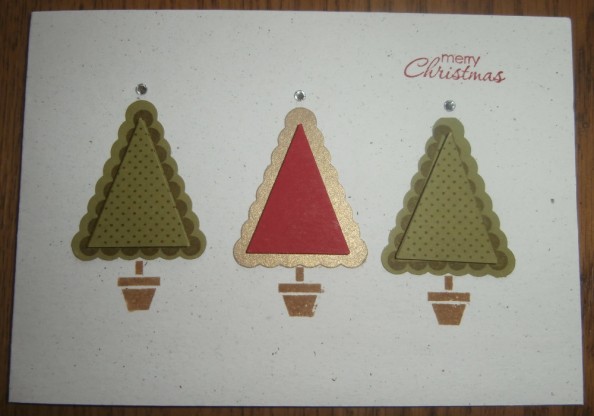 And then we “batch made” a bunch of the components and made a whole load of them, with variously stamped or not Christmas trees, some with sparkles and some without. and two different sentiments throughout the evening! It was a late night, but in all we made 18 cards between us 🙂 This photo shows the 9 Christmas cards that H was able to take home with her! 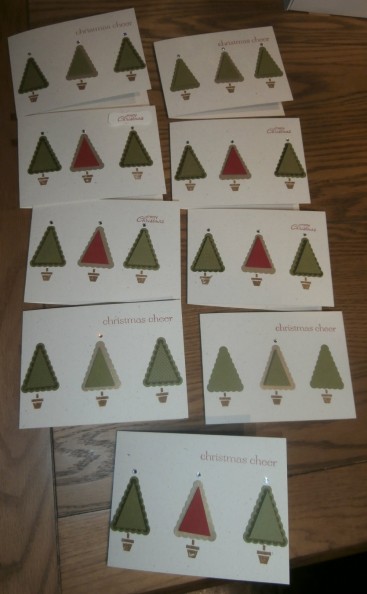 And so to the how to. We stamped a number of the dotted image from the Pennant Parade set in Old Olive ink onto Old Olive cardstock, and cut them out using the Petite Pennants Builder punch – some were cut with the scalloped pennant and some with the smaller straight edge. We also cut some scalloped pennants out of the brushed gold cardstock, and stamped and punched the same Pennant Parade image in Real Red ink onto Real Red cardstock, but only cut the small straight edged pennant. We layered them up using dimensionals, layering the red image onto the gold pennant, and the green onto the green.

The cards bases were made from Naturals Ivory cardstock, cut lengthwise down the A4 sheet to give a landscape card with a side fold. We stamped the pot from the Pennant Parade set three times directly onto the card using Baked Brown Sugar ink, and the sentiment using Real Red ink. Then we attached the trees using Snail, and added one or more Basic Rhinestones to suit the design.

These cards were very simple to make, but don’t underestimate how many pennants you will need to stamp and punch – the design uses a lot of them! I kept having to go back and make even more! But we also made some with just punched shapes, missing out the stamping step, and these still look nice. It is a great way to make lots of cards quickly, without needing a lot of supplies. I love this stamp set for its versatility, so expect to see more cards using it, both for birthday and Christmas cards at least.

I hope you enjoyed this peek into our Friday night. It was a very late night, much later than usual, but it was nice to have some social time and some craft time, and I think it was worth the tiredness on Saturday. Not to mention we got a bunch more Christmas cards done to add to the pile! I could not do that every week, though.