That’s what these cute dinosaurs are popping along to say – RAWR! Which obviously means “Happy Father’s Day” in dinosaur – or “You’re Awesome”, depending how you interpret it!

Here’s the first of the Father’s Day cards I made – this year I made 4 and they were all on a dinosaur theme except one! (And that was only because I didn’t want the cards from the twins to be the same if I could help it!) 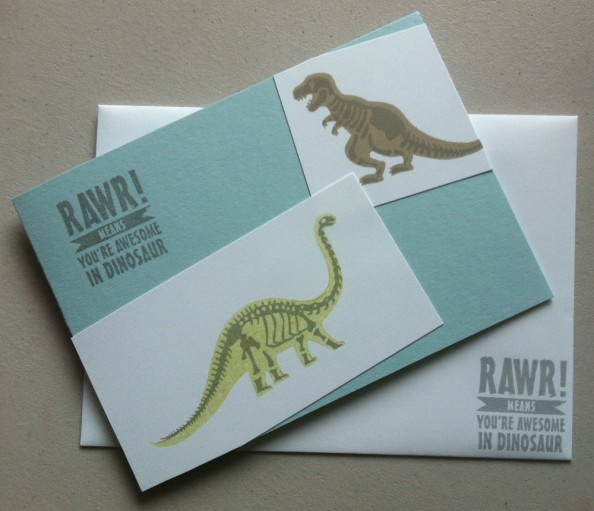 I had a bit of a dinosaur party when I was making these cards, and stamped loads of dinos and cut them into square and rectangle shaped card pieces. I then layered some onto card blanks which I had made with coordinating cardstock, and cut off any overhanging edges. Obviously I added the RAWR sentiment, or another which says “No Bones About It, You’re Great!” which is just as cute. The dinosaurs are photopolymer clear stamps which makes them great for two-step stamping as you can easily see to line them up. Again, I managed to decorate the envelope a bit as well – I am getting much better for that at the moment!

These seemed to go down well, and when I showed the photos to friends this weekend at our Stampin’ Up! team training, they liked them, which is always nice. I’m always a bit wary with card designs I have created myself in case people don’t like them, but I am slowly getting the message not to second-guess myself!

More dinos later in the week when I will show you my other “design”. Hopefully tomorrow I will be able to share with you the swaps I made for our training – it’s another idea I came up with independently of Pinterest or any other “inspiration”, and I was really proud of them! And I loved the colours. I gave one to our UK manager for Stampin’ Up!, Paula Gorry, who came along for the day, and she commented on the pretty colour scheme as well, which was fabulous! I used three of the softer tones – so come back tomorrow to see what they were. The swap was a luggage label, which may or may not whet your appetite to see it, but it would be easily translated into a card or gift tag.

I hope to “see” you tomorrow. RAWR!

Stamp Set: No Bones About It.