So following on from my post yesterday, here is the second Service Project card that I made at Convention: 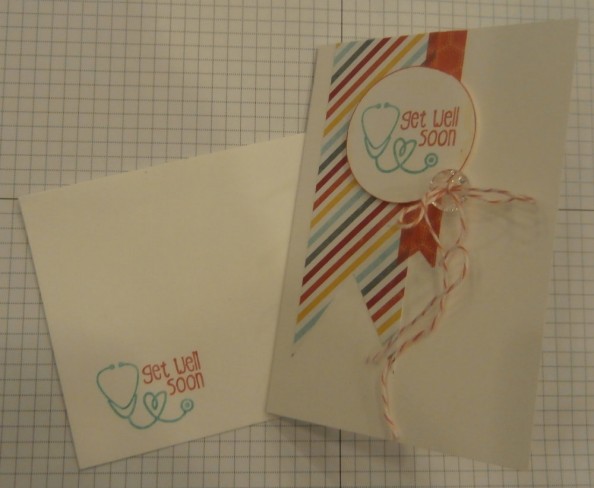 Again, it uses the Tag It stamp set from our Convention bag, with the stamp coloured with markers to get the different bits in different colours. I coloured the edge of the punched circle with the co-ordinated marker to add depth and definition to the focal point. The button was threaded with Bakers twine and the Designer Series Paper was cut into a banner shape using paper snips. Luckily, all of the pieces were cut to size for us in the pack, so this card came together very quickly. We obviously punched the circle after stamping the image, as it is *much* easier to line up the punch around the image than to line up the image into the punched shape, even with a stampamajig as the shape won’t stay still! The red stripe is some of the This and That Epic Day washi tape.

And we had to decorate the envelope, as Shelli is a great believer in never having a “naked envelope”!!

I really enjoyed making these cards, and am likely to CASE the layouts at least for some of my own cards. I wanted the “get well soon” stamp from the Tag It stamp set as soon as I saw it, but having seen the set used more, I am gradually liking the others even more as well. I like the fact that Tag It coordinates with the Chalk Talk framelits, and will probably try to make some Christmas cards with it before I run out of time. But I will get the preparation for the twins’ birthday out of the way first – there is quite a lot to do, including wrapping presents, making up their main present, and clearing the dining table (and the rest of downstairs) for their mini “party” on Saturday when their grandparents and uncle are descending on us! First things first, eh!