It was a long journey in hospital, but we finally got them home, and then the real fun began. It was so special to have them all to ourselves! We definitely could not have coped half as well as we did, though, if it wasn’t for the immense amount of help that my parents gave us – they visited every single weekend for more than 6 months. Alongside Mum working full time, and visiting my Grandparents as my Grandmother was unwell at the same time. They are heroes. Of course, they loved seeing the babies grow and develop, and they have an amazing bond with them, so it wasn’t all hard work! But as they live 1 1/2 hours plus away, depending on traffic, it was not easy.

But now they are two, and developing and growing, and suprprising us on a regular basis! They are generally happy children, for which we are very grateful. Life is tough enough with twins without them being extra demanding or hard work.

So today I am sharing their birthday cards with you – I hope that they like them. I made one pink and one blue, which is a little stereotypical, but they don’t mind and I don’t do it very often. I used the Peekaboo Frames die for the big shot, to give them an interactive aspect to their cards. I just hope they stand up to “twin scrutiny”!! 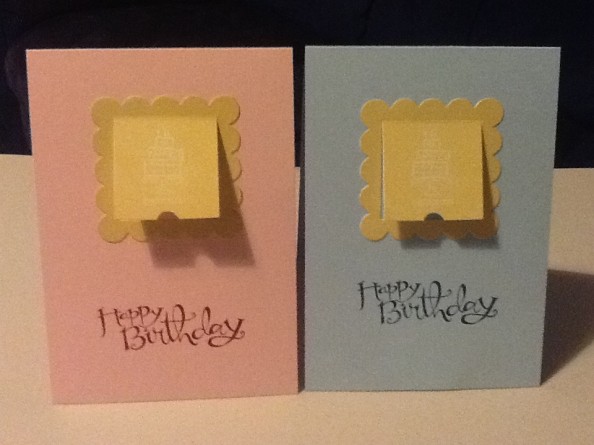 The Frames were cut from Glossy White cardstock, and then I used the brayer with So Saffron ink to colour them. Before I inked them, however, I stamped a retired “celebrate” image from the Happy You stamp set in Versamark ink to resist the brayering. (I loved that Hostess set, and was very sad when it retired. It was perfect for new crafters!) Then I rubbed the image with a tissue to get the versamarked image to show. It is quite a subtle effect in this instance because of the colour I have chosen, but it looks good. You can see it a little better in this photo: 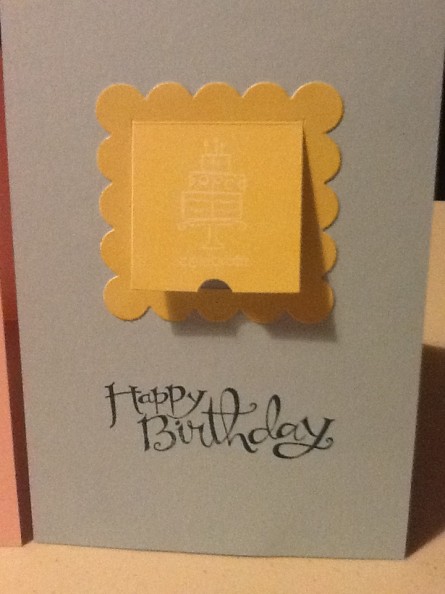 I then stamped the sentiment from the Sassy Salutations stamp set in Raspberry Ripple or Island Indigo below where the frame would be. I marked the position of the window area on the card base and used Basic Gray ink to stamp the “Never Underestimate the Power of Two” sentiment from the Yippee-Skippee set where it will be seen when the flap is lifted. I originally didn’t see the potential of the Yippee-Skippee set, but having seen it used a lot, especially on Mary Fish’s blog, I “get it” more now. So when it was on the 25% discount offer, I treated myself. So far I have only used the power of two stamp (for Gary’s anniversary card and these cards for the twins), but I can see the others being used a lot for birthdays and general occasion notecards and the like. Once the sentiment was stamped, I erased the pencil marks and used some Snail adhesive to stick the frame in place. I tried a glue stick but it would definitely not have been strong enough to stand up to 2 year old handling!

This photo shows one flap open and the other closed. Apologies for the quality of the photos, I took them on the iPad and immediately uploaded them as I would not have had time to do it “properly” with the camera and then firing up the laptop to upload them! I thought that slightly poorer quality photos were better than no photos. The shadows are due to taking the pictures when it was dark, but there’s not a lot of choice on that at this time of year! I could have got my Ottlite out, but I didn’t think of that at the time! 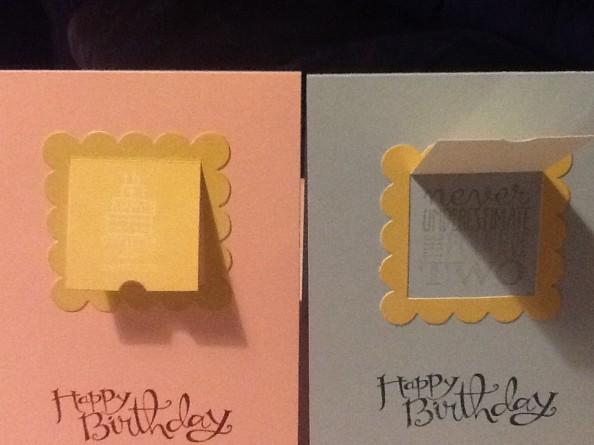 I used the retired colour Bashful Blue for Smidge’s card, as he’s not bothered what colour it is really, but I thought it would match nicely with the Pink Pirouette of his sister’s card! But I did try to keep the retired items to a minimum in this post, for your sake more than that of the twins! I hope that you enjoyed this idea – it was completely original, instead of relying on Pinterest, this time!

Happy Birthday, beautiful “babies”. You will always be my babies, no matter how big you are! I am so proud to be your mummy – but for Christmas please will you get me one of those t-shirts, you know the ones which say “Mum of Twins, What’s Your Super Power?”!! :*